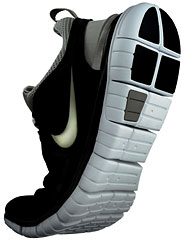 At first I though hey this is such hype, but leave it to Nike to spend millions on developing a sneaker that make it feel as though you are running bare foot. Nike sponsor many college and while visiting, they notice they were training in their shoes but racing bare foot, this got Nike to thinking and BLAM, Nike Free. Now I have not tried the shoes but I will, after reading a great article in the NY Times this morning about running bare foot. "The idea for the Free was born after two Nike researchers, visiting the Stanford track team, found that their sponsored runners ran sprints barefoot. Vin Lananna, their coach, had encouraged them to take off their shoes. "I felt that as shoes became more elaborate and intricate, the feet were getting weaker," said Mr. Lananna, who is now director of athletics at Oberlin College in Ohio. Mr. Lananna had always outfitted his team in Nike's cheapest and least structured shoe. The one time he experimented with Nike's best, his team was plagued by plantar fasciitis and Achilles problems. He now likes his runners to use the Frees."
Posted by HC Fitness and Technology Solutions at Thursday, June 23, 2005